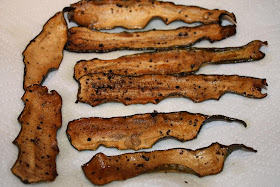 Zucchini bacon was a request of my husband. I have been making bacon bits for a while now and he wanted me to make bacon strips. I tried using thinly sliced tofu and it worked reasonably well, but it wasn’t exactly what I wanted. Since my hubby thought zucchini would be a good replacement that was what I worked on next.

This marinate is a combination of many different recipes I have seen for flavoring TVP to make bacon bits. I used the oil to replicate the fatty texture of bacon. Agave and black pepper were included to give the bacon a flavor similar to maple pepper bacon. Liquid Aminos was included for saltiness. Liquid smoke was required if I was going to get anything remotely bacon like. Apple cider vinegar was added to balance the sweetness of the agave.

Whisk the marinate and place it and the zucchini slices in a container with a lid, or a Ziploc bag. Marinate the zucchini at least 2 hours, tossing the zucchini periodically to make certain all the slices absorb some of the flavor. I marinated my zucchini for about 15 hours in the refrigerator. When I removed them from the marinade they were more pliable than when they went into the marinate.

Preheat your oven to 200 degrees preferably using your convection setting. Line two half-sheet pans with parchment or a silpat and place the zucchini strips in an even layer on the pans (do no overlap). Save the excess marinade since you may want to brush it on your zucchini bacon while it is cooking. Or you could use it for the next batch.

Check the zucchini every hour to see how it is doing. I turn mine over each hour so I can check the consistency and obtain even cooking. You can brush the bacon with the reserved marinade each time you turn it over. This may extend the length of time required to bake the zucchini, but I think it will add more flavor. How long you cook the bacon will depend on how chewy you want the end result and whether you brush the zucchini with the extra marinade. I removed mine from the oven after 3 ½ to 4 hours (the smaller pieces came out earlier).

I posted the nutritional information so that you had some idea of where the upper end of the calories and other nutrients were, but I know they are overstated. I had a good amount of the marinate left when I finished cooking. Additionally, there was a lot of fat on the baking sheet when I finished. It looks like most of the oil doesn’t get absorbed. My best guess is the fat and calories above are at least double what they are in reality. When you make the zucchini bacon you will see what I mean about the leftover marinate and fat.

This is another one of those recipes where I expect the first question is "how much is it like the real thing". Like the vegan cheese brick, you aren’t going to fool anyone into thinking this is bacon. However, it a little smoky, a little sweet and peppery like bacon. The chew is also closer to bacon than I expected. So the answer is no, it doesn’t taste like bacon, but it is similar to bacon and it does taste good. In my opinion, tasting good is what matters most in a successful recipe. However, just because it tastes good doesn’t mean I have finalized this recipe. I think I can make it more “bacon like” but this will take a few more variations.

Next time I will increase the liquid smoke, and I will probably decrease the apple cider and fat. I am considering adding a liquid Dijon to emulsify the dressing but I haven’t decided on that yet. Assuming my husband wants me to continue to “tinker” with this recipe you will see another version of this in a week or so.

If you decide to try this concept and make some changes please let me know what you do. I think this recipe is going to take some effort to finalize. I posted this recipe early in case anyone has any suggestions or wants to work on this recipe at their house. Since zucchini is so abundant now, I thought this would be a great time of year to play around with this concept.

My husband thinks this only needs more smoke. It appears I am being too much of a perfectionist again. I still may tinker with it a little, but not much since the hubby is happy with it.
Vegan Epicurean at 8/25/2009 01:47:00 PM
Share